For most homes and businesses, transitioning to the NBN (National Broadband Network) means moving from an existing ADSL, cable modem or satellite service to one of the services offered by the NBN. The NBN provides Internet services to different locations using a variety of different technologies, referred to as the Multi Technology MIX (MTM), which are: 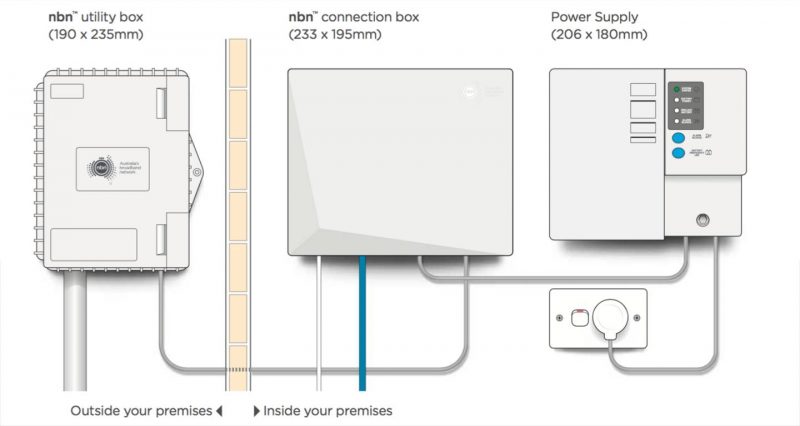 FTTN (Fibre to the Node) is the most common NBN Type and utilises existing copper cabling from a DSLAM (node) in the area to the premises. The fibre node would usually be a cabinet in the street somewhere within a kilometre or so of the premises, with copper cabling running from that right up to a modem/router installed inside the premises to provide the Internet and telephone services. The technology used for this “last mile” of copper is called VDSL (Very high speed digital subscriber line), which is similar to ADSL (Asymmetric digital subscriber line) but faster over shorter distances. VDSL requires a special modem to support it.

FTTB (Fibre to the Building) sometimes called Fibre to the Basement, is almost the same as FTTN but in this case the fibre node is placed in an apartment block’s communications room, which is often found in the basement. Again VDSL is employed to send the data to the individual apartments from the communications room, and the equipment installed inside the premises is the same as found in FTTN connections.

FTTC (Fibre to the Curb) also utilises copper cabling to the premises but the DSLAM in this case is called a DPU (Distribution Point Unit) and is located a much shorter distance away in a pit in the street just outside the premises.  The DPU requires power which comes from the customer premises using the same copper cable that the data is transmitted over. The technology used to send data at high speed from the DPU to the NBN connection box inside the premises is another type of DSL technology called G.Fast. The NBN Connection box in this case is a special type of modem which can support the G.Fast connection as well as the technology to power the DPU in the street. The ISP will often provide a router/gateway to connect to the NBN connection box to provide the Internet and telephone services.

HFC (Hybrid Fibre Co-Axial) is similar to FTTN but in this case the “last mile” is the same co-axial cable used by the Cable TV network. The NBN Connection box is a special type of modem, similar to a Cable Modem, which will be installed in the premises by an approved NBN installer. The ISP will then often provide a router/gateway to connect to the NBN Connection box to provide the Internet and telephone services.

Fixed wireless and Satellite NBN connections are used in areas where it is uneconomical to install optic fibre. Satellite services are used in remote areas where it is not possible to provide fixed cabling or provide the Fixed Wireless solution.  For these types of connections, an antenna or satellite dish will be installed outside the premises and connected to an NBN connection box/modem inside. A router/gateway will then be connected to the NBN connection box to provide the Internet and telephone services.

Connecting a DrayTek Router to NBN

Each of these services requires a different type of physical WAN connection which will determine the most suitable DrayTek router. This is listed in the table below:

Many installations have PSTN phone systems which are connected to copper cabling. As part of the NBN rollout, the copper cabling to the exchanges are removed and replaced by an optic fibre to the DSLAM or premises. As a result, all phone services are moved to VoIP (Voice over IP) which requires a router to provide phone services. The service provider will in most cases supply a very basic wireless router which provides connectivity to the NBN as well as the VoIP service retaining the existing phone numbers.

For most domestic users, the solution provided by the service provider will be adequate. However, for businesses this solution will not be suitable, especially if they need advanced business features such as VPN, firewall security, user management, Quality of Service etc. This will require replacing the basic router supplied by the service provider with a business grade router such as one from the DrayTek range.

One problem that arises is that if the user wants to retain the existing phone number, which will be important for many businesses, they are forced to keep using the ISP supplied router. This is mainly due to the service provider not providing the phone configuration details to their customer. These details include SIP configuration settings as well as the username and password for the VoIP account.

One scenario we will look at is for a business which was originally on an ADSL service and had a PSTN phone line.  The business also has VPN connections to branch offices as well as dial-in VPN for its sales staff visiting clients. 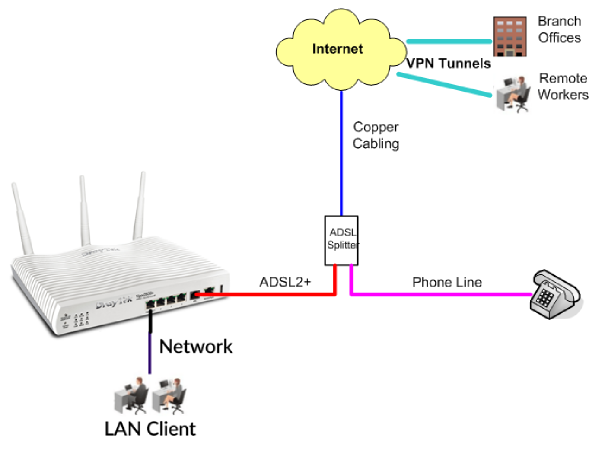 When transitioned to the NBN, the business was connected to VDSL2 and was supplied an all in one router which had Wi-Fi capability as well as a phone connection. The phone settings are locked to the supplied router. However, the ISP supplied router does not have business level features such as VPN, firewall security, user management, Quality of Service etc. This prevented branch offices and sales staff from access the main office network via VPN. The topology of the new network is shown in the diagram below. 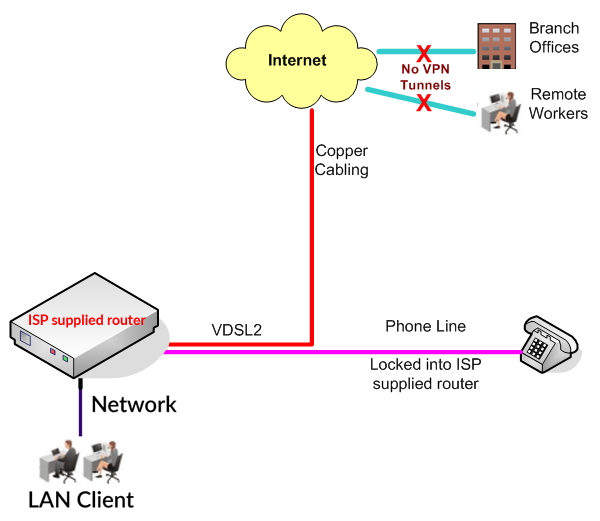 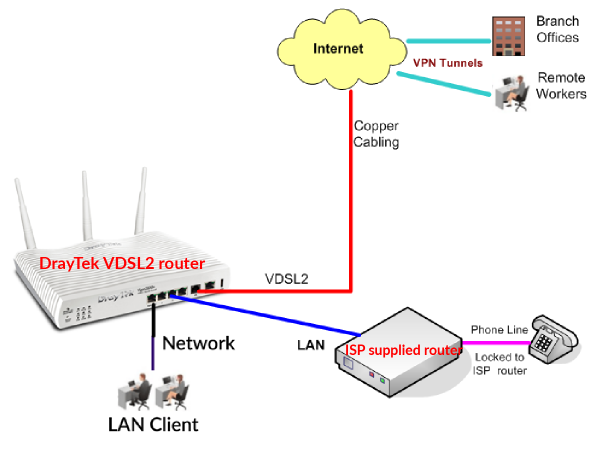 1. Get the ISP connection details from the ISP supplied router and enter them into the DrayTek router in WAN >> Internet Access >> Details Page.

Note: To prevent an IP address conflict it is recommended to choose an IP address outside the DHCP range in LAN >> General Setup >> Details Page for LAN1, or use the LAN >> Bind IP to MAC facility to bind the chosen IP address to the MAC address of the ISP Router’s WAN port.

In this scenario now all traffic appearing on WAN 1 will be forwarded to the IP address 192.168.1.100. Note WAN1 is our VDSL connection. Other scenarios may be using WAN2, in which case the DMZ host will need to be configured under the WAN2 tab.

3. Connect the ISP Router’s Ethernet WAN port to one of the DrayTek Router’s LAN ports*.

* Note: On some dual WAN and multi-WAN routers such as the Vigor2862 series and Vigor2926 series, there is an option to configure a LAN port as a dedicated DMZ port to service a whole subnet. This is useful where more than one device needs to be access to the DMZ. This is configured in LAN >> General Setup>>DMZ Port menu. In this case we will need to connect the ISP supplied router to the dedicated LAN port (Port 4) on the DrayTek router.

To prioritise VoIP traffic through the DrayTek router, check that “Enable the First Priority for VoIP SIP/RTP:” is selected as shown below in Bandwidth Management >> Quality of Service menu.

ISPs Who Require VLAN tags for Authentication. Eg TPG in Australia and UFB in NZ.

Some service providers also require a VLAN tag to be associated with the router. In these cases you may find that the DrayTek router cannot connect and/or the home phone (VoIP) is offline/unregistered. The example below looks at one service provider, Vodafone, and shows how to utilise the VLAN settings in the DrayTek router to allow VoIP services to be used with the ISP supplied router connected to the DrayTek Router’s DMZ port. 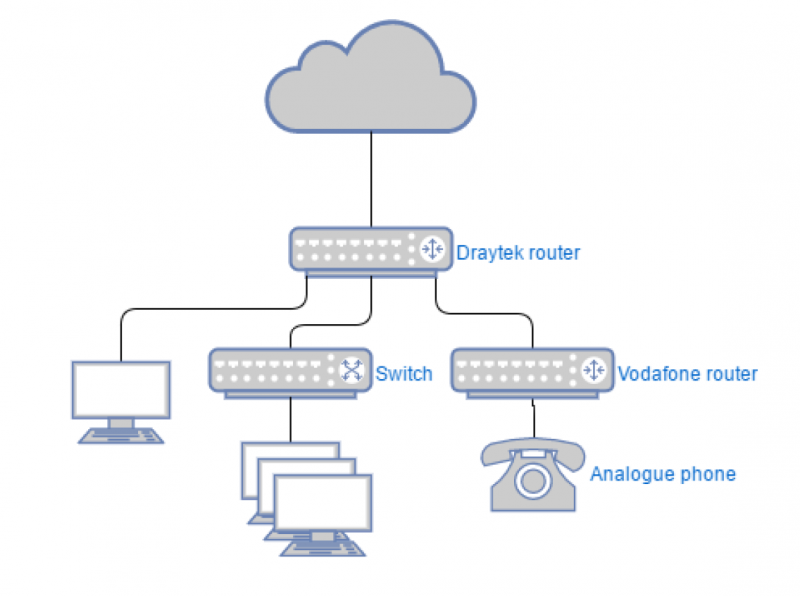 Using a 4 port Ethernet WAN router such as the Vigor 2133 the method is as follows:

1. Configure the DrayTek as the Internet facing router per the previous section, except in this case also enter the Service Provider’s required VLAN ID tag under WAN >> General Setup, then select the required WAN. 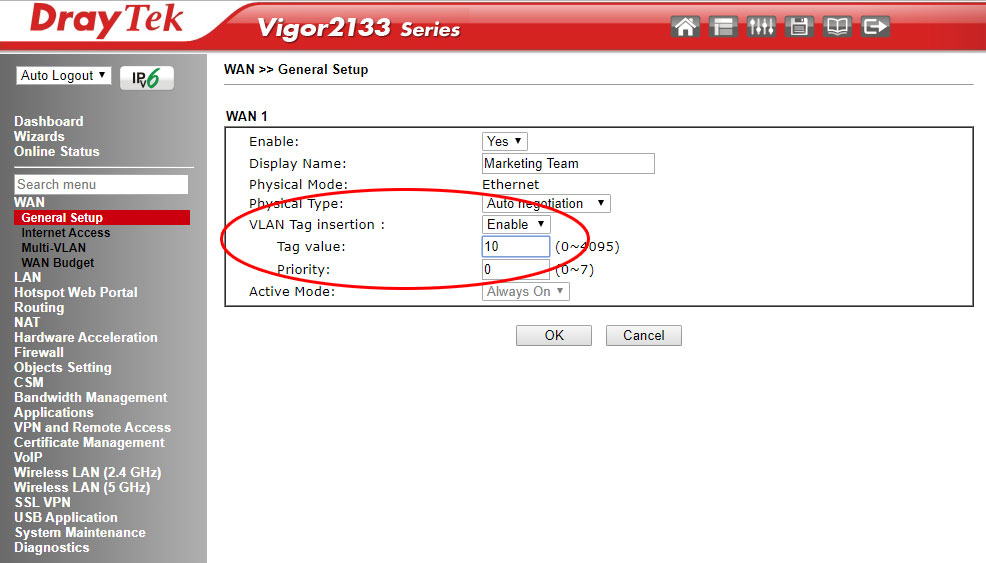 2. Now configure LAN port 4 to be on the required VLAN tag value of 10. (Other ISPs may require a different value. Eg TPG uses 2)

To do this go to LAN >> VLAN Configuration menu and use the following settings: 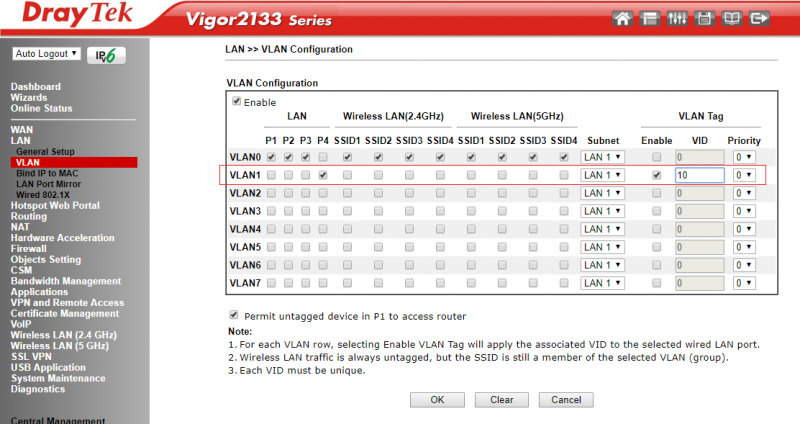 Connect the ISP provided router’s WAN port to LAN port 4 of the DrayTek router. This should allow the ISP supplied router to get an IP Address from the DrayTek using VLAN 10 as it normally would when connected directly to Internet. However, in some cases you may need to also set the VLAN tag in the ISP Router’s WAN details. Eg: 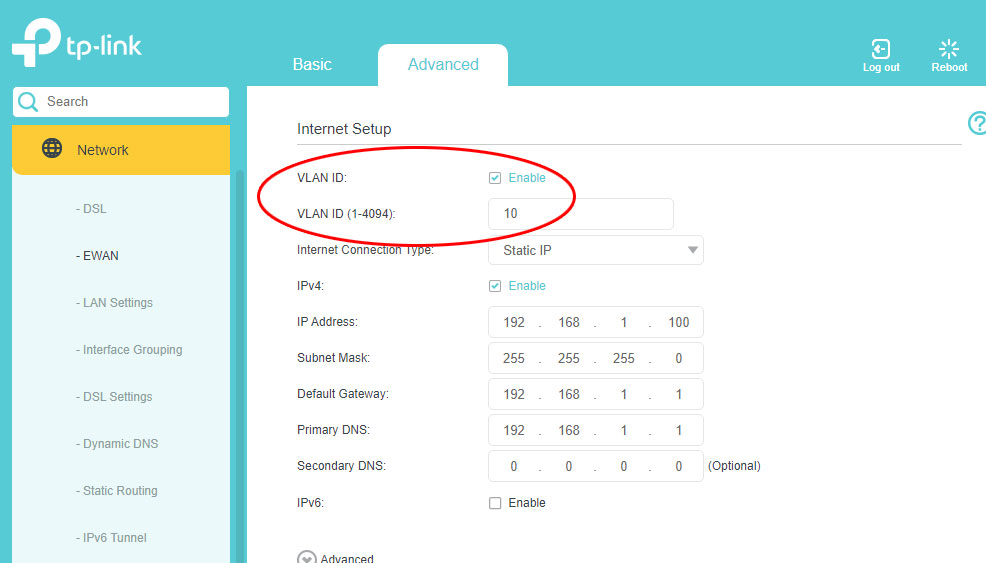 Note: It may be necessary to change the LAN Address range on the ISP provided router to a subnet outside the LAN segment of the DrayTek router. I.e. something other than 192.168.1.x. eg: 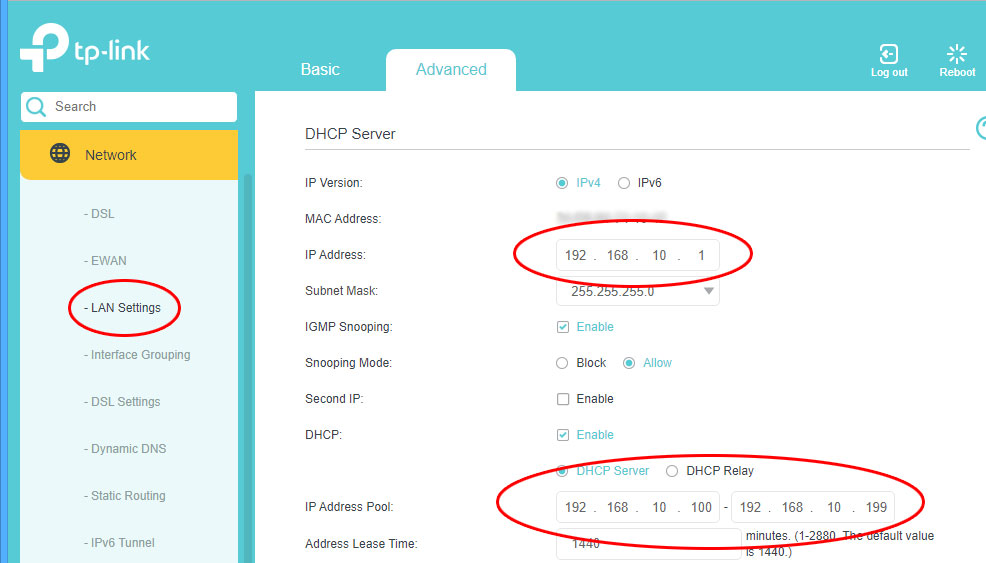