What is Airtime Fairness?

What is Airtime Fairness?

Getting the Best with Airtime Fairness

Slow devices dominate the shared medium over fast devices in existing Wi-Fi networks which affects the overall performance of the network. Air Time Fairness is now available to solve this problem. It significantly improves range and performance.

Which is accomplished by:

With beamforming we get higher speed over long distances.  Instead of radiating equally in all directions, the wireless router instead concentrates energy in the direction of the wireless clients which improves the performance.

A higher number of users

It supports simultaneous transmissions to multiple clients with Multi-user MIMO

802.11ac has the advantage of the 5 GHz frequency, which usually is less congested and less likely to have interference issues with other wireless signals compared to the more common 2.4 Ghz Wi-Fi signal.

What is Air Time Fairness?

To understand this technology, let’s break down the term “Air Time Fairness” as fairness by time using air as a medium. Instead of fairness by packets it is now fairness by time. Each client gets the same airtime, regardless of client capability and capacity. This option is very useful in environments mix of 802.11a, 802.11g, 802.11n clients are served together. High throughput clients do not get penalised because of slower client transmissions that take more airtime due to lower transmit dates.

For example, we have two clients A & B. In normal scenario client B will need only ¼ of the time compared client A and which is not a fair approach to client B. Client B performs faster but client A’s performance it is being impacted. Now let us look as the second scenario where we used Airtime fairness. Now both clients are getting same transmission time, and because client B is faster, it can now transmit 4 times as fast compared to client A. Client A is unaffected and still transmits the way it was doing before. Network performance will now improve. 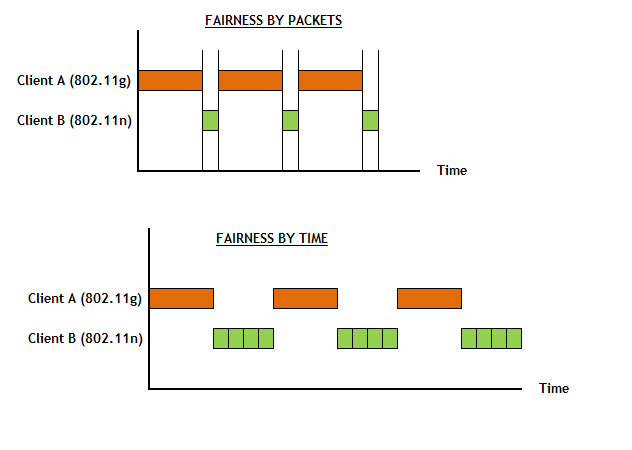 Beam Forming: Beam forming transmits data towards direction of the device rather than transmitting in all directions. This kind of focus strengthens communication between transmitter and device. Hence this technology provides wider coverage with more reliability 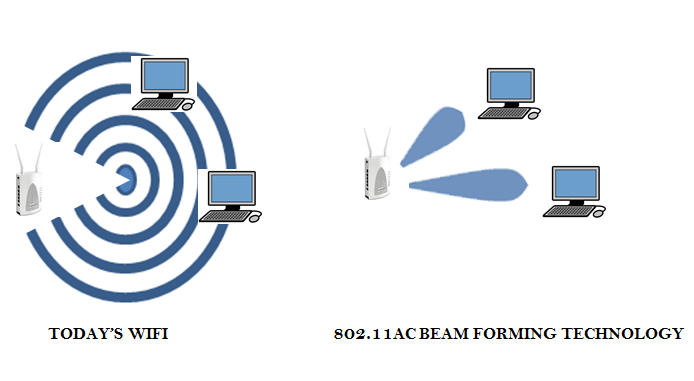