What’s the difference between DMZ Host and DMZ Subnet?

Home/LAN Applications/What’s the difference between DMZ Host and DMZ Subnet?

What’s the difference between DMZ Host and DMZ Subnet?

DMZ, which stands for Demilitarised Zone, is an additional layer of security between the WAN and the LAN. A router with a DMZ subnet will allow access to the DMZ from the WAN while having the LAN still protected by the firewall. The most common application of DMZ is to allow servers such as mail servers, HTTP/HTTPS web servers and FTP servers, to provide service to the hosts on WAN.

On Vigor routers, there are two ways to set up DMZ: DMZ host and DMZ subnet. Setting up a DMZ host will open a single host completely to the WAN, and all packets will be forwarded to this single host, unless:

In the illustration above, the green arrow indicates normal usage of the DMZ host, where users on the Internet can access the DMZ host using the WAN IP address of the router. If an attacker breaches the security of the DMZ host, the attacker may gain unauthorised access to other hosts on the same subnet, indicated by the red arrows. 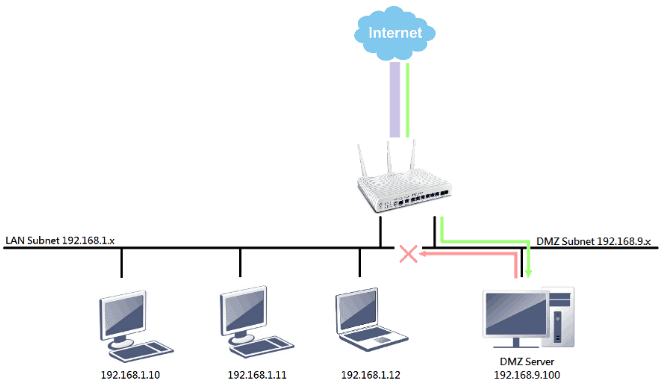 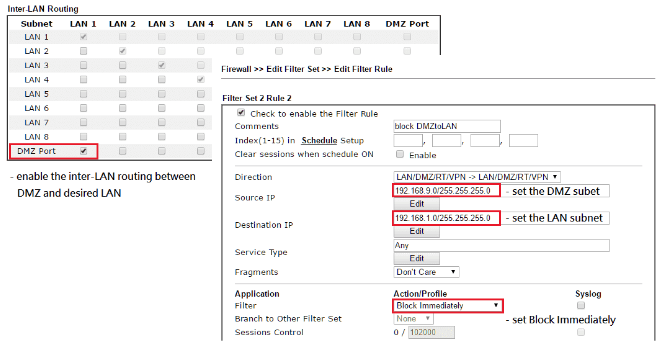 Even though the configuration of the DMZ subnet is a bit more complicated than that of the DMZ host, the result of having a more secure networking environment makes it worthwhile.

The dedicated DMZ port on Vigor3220

On most Vigor routers with multiple LAN ports, the router will set aside one of the LAN port as the DMZ port when the DMZ subnet is enabled. The Vigor3220 series of routers, however, are equipped with one LAN port, plus a dedicated DMZ port that is always enabled.